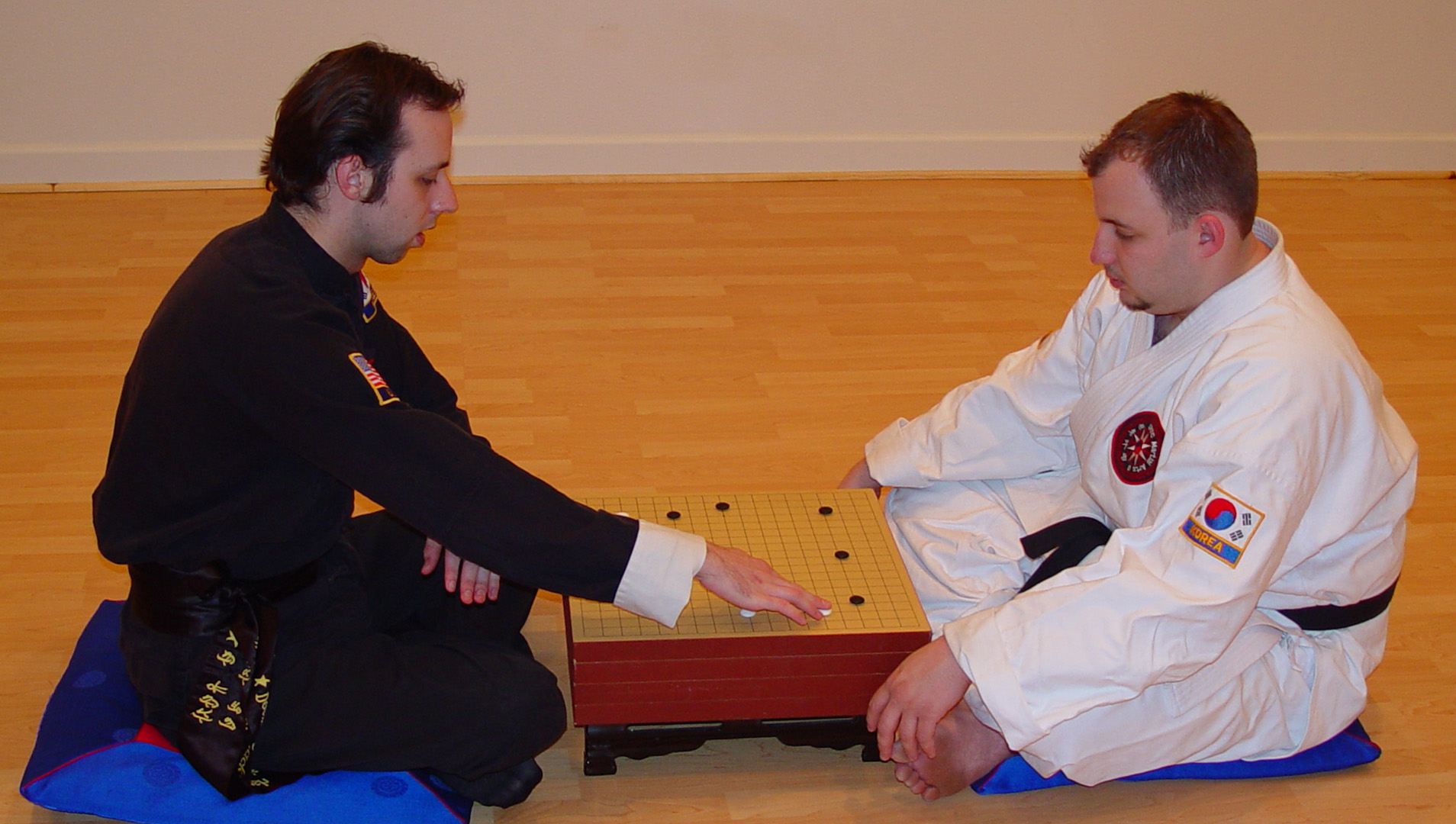 BADUK A GAME OF LIFE

Long ago, when students first began the study of martial arts, many masters taught within a 36-chamber system. One of the first chambers was the mastery of the game of baduk, which was created to help those who master it to lead a productive, healthy and happy life.

Long ago our ancestors depended greatly on understanding the environment as well as the continual changing events within that environment to survive. They used their awareness of natural instincts and of the coming seasons to help ensure the fragile balance was attained, logic follows that a depended awareness and a curiosity for the elements that make up our reality was pursued with great inspiration.

This inspiration paved the way for the arts in the form of philosophy, medicine, writing, speech, and martial arts as well as in many others areas. Contrasted with life today, the balance of survival can be demonstrated by driving to a grocery store: the understanding of the seasons is shown by turning on the furnace or air conditioning; while placing our great inspiration in finding the closest parking space to the store. When comparing these two time periods, it seems that one is a root and the other a branch from that root. It is this difference that makes the world “traditional” gain popularity in modern societies.

One of the greatest arts surviving the passage of time is the martial arts. Traditionally, masters taught martial arts through a system known as the 36 chambers.

Basically, each chambers contained a different subject with a master assigned to each chamber. Some rooms would teach the principles or gravity and balance, others of energy or ki(chi). If a student passed the test to begin martial art training, one of the first chambers encountered was master of baduk. Baduk, as it is called in Korea, is also known as Wei Chi(China) or go (Japan, Europe).

This grading system started from eighteen-grade to first-grade, and then from firs-dan (first degree black belt) to ninth –dan (ninth-degree black belt). Different levels of grading (twelve or ten grade) systems have evolved through time and in different areas of the world yet the similarities in the grading systems between martial arts and baduk are unmistakable.

It reveals the strong and direct relationship between baduk and the martial arts that has existed for thousands of years. Also it is important for the martial artist to know that in ancient Eastern societies traditional baduk, martial arts, and Eastern medicine were all tied together through the concept of Ki (also know as chi or qi). The work Ki means “life force” or “vital energy”. This is the reason why it was once very common for a great martial artist to also be a great practitioner of Eastern medicine; the understanding of the two could be seen in baduk.

Baduk is an ancient Eastern strategy game played with white and black stones. It’s fundamental principle is the concept of balance and harmony: Um and Yang (also known as Yin and Yang). Again, it should be noted that baduk is not merely a game of strategy, it is also a mental discipline and philosophical tool. There is very little historical evidence pertaining to the origin of baduk but there are many myths and theories. Although no one knows for certain, it is generally accepted that baduk originated in ancient China about 4000 years ago and then later spread to Korea, Japan, Europe, and America. One plausible theory suggests that it was originally a method of tracking the seasons.

This would have been a very useful tool since the lives of the ancient Chinese were based around agriculture. There are 361 intersections on the board that roughly translate with the number of days in a year. By placing one stone each day, they would have been able to track the growing seasons and also the flooding of the Huanghe River. Another myth involves Chinese emperors Yo and Sun.

It was said that they invented baduk to teach their weak-minded sons, Danju and Sang-Gyun. There are numerous well-known philosophers whom have made references to baduk. Confucius thought of baduk as a form of mental exercise that consumed mental energy. Therefore, Confucius thought that baduk was useless because of his belief in its negative power. However, in the 1600’s philosopher Song Si Yeol studied Sungni-hak (the art of human nature) and argued that baduk does not devour mental energy but rather improves the mind.

These benefits include concentration, memory and judgment as well as many other skills needed for intellectual endeavors. Today there is strong evidence that without mental exercise, the mind begins to stagnate, possibly leading to ailments such as Alzheimer’s disease.

This is why baduk is beginning to be seen as a very healthy way to maintain one’s mental health by keeping the mind active.

One man who has is dedicated to promoting health and enhancing life for others is Grandmaster Edward K. Song of Dallas, Texas. Grandmaster Song came to the United States with the intent to spread the original and total concepts of baduk through Ki concepts as it relates to traditional martial arts and Eastern medicine.

Grandmaster Song has dedicated several years (now 16 years) of his life as well as personal finances to the development of the TBA (Traditional Baduk Association, the first Korean Baduk Association), the ABA (American Baduk Association, the first American organization), and the baduk life program. Grandmaster Song developed the baduk life program not only to educate Americans in this activity but also to spread it nationwide. This program is also created for the purpose of promoting a healthier life through increased concentration, wisdom, and the development of a healthy and useful philosophy.

As discussed, baduk can possibly help to prevent Alzheimer’s disease as well as provide an activity that contributes to early neuron development that affects logic, IQ, and EQ in young people. Grandmaster Song has committed his life to sharing his knowledge of how to live a better life with all people throughout the world.


Join Us For Exclusive Strategies: